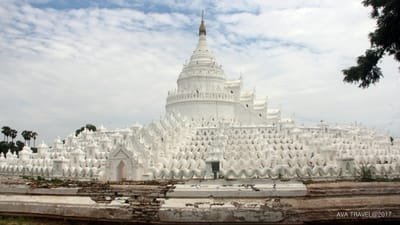 First discovery of the city, astonishing city where mingle the most authentic colonial architecture and many green spaces, gardens and lakes. Visit the Shwedagon Pagoda, "Pagoda d'Or" which dominates the city and which is the symbol of this nation "Buddhist".

Flight in the morning for Heho Route to the Inle Lake. The afternoon is devoted to the discovery of Lake Inle, its floating gardens, villages, monasteries and famous fishermen, Inthas.

Shan open country and altitude, a lake surrounded by mountains whose name means "Lake of four villages, has long brought together people of Burmese origin, the Inthas whose speciality, besides fishing, is culture on floating gardens. These "famous floating islands" are masses of plants that Inthas cut into strops of about fifteen meters long and two meters wide and shoot at the lake. They cover the soil and mud and successfully grow all kinds of vegetables.

As for fishingm the lake is very shallow (between 1m and 5m), fishermen have imagined a kind of long rigid cage-shaped cone they cast on the fish they can see with the naked eye and with a trident seal the trap. They needed more than two hands to accomplish all these things: that it does, is a foot maneuver the boat with an oar in a vertical position, while both hands free capture fish.

A whole day can be devoted to a visit to the lake. In addition to meetings with fishermen in full activity, where farmers tend their island "floating", you must see some pagodas and monasteries.

The Phaung Daw U Pagoda on stilts, the 12th century. The Monastery of Nga Phe Chaung, said monastery of "cats jumpers." The site Inthein of ancient stupas (and with a picturesque market and the floating markets).

Flight to Mandalay. The first afternoon exploring the city that starts with the Mandalay Hill Pagoda then Kuthodaw, the largest book in the world, a series of stelae (729) - all the texts of the Tripitaka - the Pagoda which contains Kyauktawgyi a huge statue of Buddha carved into a single block of marble, the Pagoda Mahamuni the Monastery of Shwenandaw.

Mandalay, the second largest city, the former Burmese capital of the kingdom, a city is currently booming.

The city built in a geometric design around the palace of the last Burmese king, is a young city. It is the city of Kind Mindon it built from 1857 to commemorate the 2400th anniversary of Buddha's death that the legend (the facts have never been proved) that he visited these places and said the need to build a city for the anniversary of his death.

Unfortunately, Mandalay was caught in the turmoil of World War II and often bombed. The huge Royal Palace was razed, the fact remains that the walls, and the destructive work was completed by a huge fire that destroyed the city in wood in 1984. Fore memory (and tourism) a reconstruction plan is currently underway. But all around Mandalay, three capitals of Burma remains: in 1315 Sagaing, Ava in 1365 and 1720, and Amarapura in 1782. If the current modern city has little charm, the surroundings contain many treasures. Morning excursion to Amarapura south of Mandalay. Visit the Monastery Maha Aungmye Bonzan, the Pagoda Htilainshin. Then visit the Sagaing Hill and his ten miles pagodas.

Fly to Bagan. Bulit in the 9th century at the confluence of the Chindwin and the Irrawaddy, Bagan was the great capital of Southeast Asia from the 10th to the 12th century. Hundreds of buildings remain. Visits: Nyaung Oo Market, the Pagoda Shwezigon, the origin of the style of Burmese stupas, the Kyansittha u min, the Wetkyi in Gubyaukkyi and painted murals of scene of Jakata, Htilominlo Temple, the Temple Shweguyi. Sunset on the Irrawaddy, the pagoda Bupaya.

Carriage Rides. Visits: Ananda Temple, Pagan symbol, the Dhammayangyi, Temple Manuha with giant images of Buddha, Nanpaya, one of the first temple built in Bagan (9th), the Thatbinnyu. A workshop lacquers. In the evening, puppet theater.

Visit the village to know the daily activities of villagers. Visit to the temples of Seinyet the Sisters, the Abeyadana, the Sulamani, the Lokananda morning. The afternoon Shwesandaw, Mingalazedi and sunset with boat trip on the Irrawaddy River.

Free morning. Flight to Yangon in the late afternoon.

Transfer to the airport for departure flight.