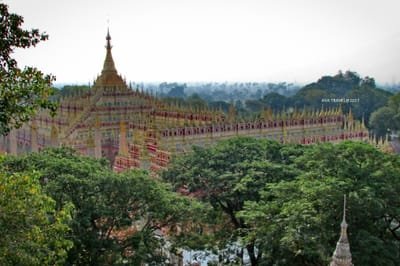 First discovery of the city, astonishing city where mingle the most authentic colonial architecture and many green spaces, gardens and lakes. Visit the Shwedagon Pagoda, "Pagoda d'Or" which dominates the city and which is the symbol of this nation "Buddhist".

Road for Bago, Discovery of the former medieval port of Pegu. Visits: Pagoda Shwemawdaw, Hinthagone Pagoda, the BUddha of COasted Shwethalyang, one of the most beautiful and revered (10th century), Pagoda Mahazedi, the four colossal Buddhas of Kyaikpun. End of the visit of Bago by its picturesque market, then back to Yangon.

Flight to Heho in the morning, then route to Inle. Visit to the monastery Shwe Yan Pyay Kyaung then on to the Inle Lake, known for its beautiful gardens and floating islands, cited lake.

The entier day is devoted to the discovery of Inle Lake, its floating gardens, villages, monasteries and its famous fishermen, Inthas, floating market.

Route for Kalaw, center of numerous ethnic minorities, a small town 1300 m above sea level which has retained its style and British colonial rule, then the way to Pindaya, a small village became famous by the presence of caves containing thousands of statues Buddha carved in the rock Accommodation at the hotel at the foot of the caves.

The morning flight to Mandalay, the second largest city in the country, the former Burmese capital of the Kingdom, currently booming. Visit the city that starts with the Mandalay Hill then by the Kuthodaw Pagoda, the biggest book in the world, the Pagoda Kyauktawgyi which contains a huge statue of BUddha, the Pagoda Mahamuni, the Monastery of Shwenandaw.

Excursion in the morning to Amarapura south of Mandalay,
the ancient capital of the Kingdom. Visit Monastery Mahagandaya and wooden bridge U Bein. In the afternoon, tour the huge unfinished pagoda of King Bodpaya to Mingun, the Pagoda Myatheindan then rout to Sagaing, famous for its marble quarries, the ancient capital of the Kingdom Chan. More than 600 monasteries, stupas dedicated to Buddha populate the hill Sagaing. Overnight Mandalay.

Flight to Bagan in the morning. Hundreds of buildings remain of what was at the 11th and 12th centuries one of the world's largest cities. Ride in horse-drawn carriage. Visits: market-Nyaung Oo, the Shwezigon Pagoda, Kyansittha, Wetkyi In Gubyaukkyi, Htilominlo Temple, the Temple Shweguyi. Sunset on the Irrawady, the pagoda Bupaya. In the evening, puppet show.

Visits: the Temple of Ananda, a symbol of Pagan, Dhammayangyi, Manuha Temple with its giant images of Buddha, Nanpaya, one of the largest temples built in Bagan (9th), Thatbinnya. In the evening, puppet theatre.

Road for Mount Popa, a former volcano became the santuary of minds "Nats" whose worship remains Buddhism, then sides of the road for Sale. Visit Yokesone Kyaung monastery, a small masterpiece of wooden architecture. Most Burmese, but very rare, the largest lacquered Buddha from Myanmar in Nan Paya (5.5 m tall). A ten 10 km a large monastery 17th while teak, Yoke Sone.

Flight to Yangon and further visits to the captial.

Start by time of flight chosen.